Parenting debates and me

(2) When she was born, I told myself that I would do my best to stay the hell away from parenting debates.

(4) Then Jamie Oliver, my one true food love, went and said something about breastfeeding and stirred up a hornet's nest. All mothers everywhere were a step short of flashing their milk laden boobs at him to prove a point about how he needs to shut up. Women were talking about their guilt, shame and choices and "no boobs, no opinion" was the mantra.

(5) It took me almost 48 hours online before I found a sane voice that said - yes, he's a man, but he's also a dad of four who has seen first-hand the impact of breastfeeding babies. He also knows about diet and nutrition, so it's alright if he is alarmed at breastfeeding stats in his country and wants to tell more women to kindly breastfeed because it is good for babies.

(6) Jamie Oliver also went on record to clarify that the statistics did worry him and he knew that it wasn't always easy for new mothers to breastfeed. All he meant to say was if your body is cooperating, then kindly breastfeed.

(7) All my sanctimommy impulses were up and I went on a Twitter rant .

(8) Later that night I also engaged in a very thoughtful debate on the same topic. I realised that I was probably being an asshole earlier, so, I deleted said rant. I also realised that this subject needed a longer post, hence this list.

(9) Now that you have some context, let's proceed into paragraphs!

First off, I am still breastfeeding Fluffy. I breastfed exclusively until she was 6 months and I then started solids with feeds in between. I started formula @ 8months. Right now, I nurse her to sleep for day naps and night sleep.

When I was pregnant, pretty much all doctor's rooms were filled with pictures and charts about breastfeeding and how it is beneficial. I also spent a lot of time online to read up about it. There were also lots of women who shared their painful stories of not being able to because of various reasons - some didn't lactate at all, some did lactate but weren't producing enough, some lactated but had to get back to work, so chose not to breastfeed and put their babies on formula asap, some mothers had adopted their babies so breastfeeding was not even a criteria, some simply chose not to. I realised then that being a mother is not defined by how you choose to nourish your child in the initial days of being a mother.

All that being said, science supports the claim that breastfeeding your baby is a better option. There is no arguing that. The nutrients it provides are still being studied and trying to be replicated by companies who are manufacturing formula. Even if they do get the formula right, mass manufacturing it is going to be difficult. The entire industry wants to replicate breastmilk, not eliminate the need for it. No matter what happens, a doctor will advice an expectant mother to try and breastfeed, at least for the first three months. This tendency to let breastfeeding be the first option isn't going anywhere and it's time we all accept it.

Now, if women are feeling shamed, then that depends on the person putting the point across. On either side. If a breastfeeding advocate makes a point in a way that makes a non-breastfeeding mother guilty or ashamed, then that is absolutely wrong. There is no need to shame someone for any reason. Each woman has her own reason behind the choices she makes. I am a formula baby. My mother had to go back to work after three months, and my grandmother and aunts were the ones who took care of me. Back in 1984, breast pumps weren't common place. My mother thankfully had a good support system, so she never felt that she was doing anything wrong by giving me lactogen. In fact, she wanted me to try out formula for Fluffy and I told her I would, but not immediately.

Those of us who have the option of a healthy and supportive environment when we have babies should consider ourselves lucky. Every time we sit in our happy environments and dismiss other mothers for their choices or circumstances, we're literally losing hold of the sisterhood. And that's a big NO. I don't know what it is about parenthood that seems to bring out the most self-righteous assholery in our natures. Why do we want to shame other mothers? Okay, so your baby isn't throwing an epic tantrum, doesn't mean that a mother whose baby is trowing a tantrum is a bad mother. There's no need to get sanctimonious about it. For any reason. It cannot be difficult to empathise or even sympathise with a mother who is having a difficult time of parenthood. Be there, be supportive. How is it difficult to do that?

As for breastfeeding itself - I am an advocate. I will always be one. IF mothers choose not to or can't or came by parenting via surrogacy or adoption, then, I will support their choices and cheer them on and probably hold their hand through their baby's all-nighters! It is not for us to shame mothers, it is for us to ensure that mothers are made to feel like they aren't alone with a tiny new baby.

There is also another aspect to breastfeeding and that is nutritional support. For a new mother lactating is not enough, your body needs to be nourished in order to produce milk. And this shit about "women in poor countries breastfeed, it doesn't matter if you aren't eating" is just misguided. You need to be consuming healthy quantities of food in order for your body to produce the milk your baby needs. If you aren't eating at all or eating enough it will, in the long term, affect how much milk you are able to produce and, in turn, how much your baby is consuming. It doesn't mean you go overboard and eat everything in sight! Eat good food, well prepared and nutritious. Some women may not have the means to do it, and that is a problem that needs to be addressed by those working in the field (any person jumping in saying rural women need to be thought about will get a slap from me, When I say women, I mean all women. differentiating is not helping! Bleddee!)

Breastfeeding women aren't perched high looking down on women who aren't. I remember when my boobs hurt and I thought fluffy was latching on wrong only to discover that breastfeeding doesn't automatically absolve you of anything. There's infinite ways to shame women and it doesn't matter what you're doing right or wrong, someone somewhere will find a way to find fault with you. And take it from me, the person shaming you will be another woman. It's such a shitty vicious cycle. The worst part? The shamer is often found bitching about how things are difficult and not everyone understands what women go through. I have no words for those kind of hypocrisies. I am also guilty of saying things like this. And it is a constant struggle for me to get past my own baggage to truly empathise. 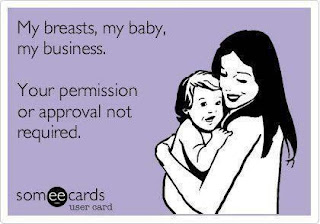 It is getting impossible to have a sensible debate. Every time someone makes a point, rather than understand or let that person explain further, we jump into the fray like rabid dogs and silence common sense. This whole conversation around breastfeeding for example, men wanting to have a say in it is mildly ridiculous, but, if they would like to encourage women to consider breastfeeding as a nutrition option without making other women feel guilty or shamed, then I am all for the support. Whether we like it or not, most policy makers are men and if more of them are coming on board and encouraging a better quality of parenting for mothers everywhere, choices notwithstanding, then let them come on board. Because there is a small issue with the "no boobs, no opinion" argument, it is excluding those people who want to offer a genuine helping hand in letting these issues come to the fore and for conversations to begin and develop into healthy discussions and debate.

I just hope that as time goes by, simple issues like this don't have to be hotly debated and that each mother makes the decisions she wants to make without having to justify it to anyone. Least of all to other mothers!

And this long, rambling post is precisely why I don't want to engage with parents man. We're all fucking insane!

Posted by Unknown No comments: